Graphic: The official name for FIPS 140-2 is “Security Requirements for Cryptographic Modules.”

FIPS 140-2 yet another security-related piece of the puzzle. It ensures that sensitive government information stored on cryptographic modules is well-protected from independent and state-sponsored hackers. Keeping the government’s sensitive information out of these individuals’ hands is one of the main reasons why the National Institute of Standards and Technology (NIST) developed the publication in the first place.

But what is FIPS 140-2, how does it protect the government’s sensitive information, and how does one achieve FIPS 140-2 validation or compliance?

We’ll answer these questions in more in this blog post, and stay tuned for our next blog post on FIPS 140-3 and how it compares to FIPS 140-2.

Graphic: FIPS 140-2 is a publication about securing sensitive information on cryptographic modules.

Federal Information Processing Standard (FIPS) 140-2 is a NIST publication that lists security requirements for cryptographic modules protecting sensitive but unclassified information in computer and telecommunications systems. The NIST issued the standard on May 25, 2001, as a successor to FIPS 140-1, which also covers security requirements for cryptographic modules.

If a cryptographic module is compliant with FIPS 140-2, that just means it’s FIPS-approved, recommended by the National Institute of Standards and Technology (NIST), that it satisfies certain cryptographic security features outlined in the standard. In the specific case of FIPS 140-2 hard disk drives (HDDs) and solid-state drives (SSDs), a FIPS-140-2-compliant drive is often referred to simply as a “FIPS drive” or “FIPS-approved drive.”

FIPS 140-2 cryptographic modules protecting sensitive but unclassified information are most often found in government and military applications and environments, from the high-powered desktop workstation in the safety and comfort of an air-conditioned government office, to the edge server deployed at the severe and unforgiving frontlines of a battlefield.

What does it mean to be compliant with FIPS 140-2?

If a cryptographic module is compliant with FIPS 140-2, that means it complies with one of the four security levels described in FIPS 140-2: Level 1, Level 2, Level 3, or Level 4.

In addition, if a specific module is being used by the federal government, then it has undergone a testing and validation process via the Cryptographic Module Validation Program (CMVP), a joint effort between the NIST and Communications Security Establishment (CSE) of the Government of Canada.

If the agency specifies that the information or data be cryptographically protected, then FIPS 140-2 or FIPS 140-3 is applicable. In essence, if cryptography is required, then it must be validated.

The FIPS 140-2 validation process can take up to a year to complete, can cost as much as $100,000, and there are no guarantees that the product will cut the mustard.

One of the main goals of FIPS 140-2 compliance, according to the standard, is to prevent hackers, organized crime groups, and economic competitors from mounting attacks on the federal government’s sensitive information.

FIPS 140-2 Security Level 1 provides the lowest degree of security and lists basic security requirements, such as the use of a FIPS-approved algorithm. Extensive physical security protections, such as tamper-resistant enclosures and pick-resistant locks, as well as role-based or identity-based authentication, are not required at this level. Modules at this level can even be used in an unevaluated operating system environment.

FIPS 140-2 Security Level 2 strengthens the physical security of a module by using tamper-evident technology, or technology that makes unauthorized physical access to a module more difficult but also easy to detect. To meet the requirements of Security Level 2, a module must have some combination of tamper-evident coatings, seals, and pick-resistant locks. In addition, role-based authentication must be established, meaning the module must verify that an operator is authorized to assume a specific role to control specific functions of and perform specific tasks on the module. An evaluated operating system must also be used with Security Level 2 modules.

FIPS 140-2 Security Level 3 further strengthens the physical security of a module by using strong module enclosures and zeroization circuitry that erases all plaintext and critical security parameters once the module’s removable covers or doors are opened. Identity-based authentication and execution on an evaluated operating system are also required at Security Level 3, as is the physical separation of ports or logical separation of interfaces, which protects plaintext CSPs and software and firmware components from unauthorized executables.

How do you become compliant with FIPS 140-2?

To comply with FIPS 140-2, a cryptographic module must employ FIPS-140-2-compliant algorithms, cryptographic key management techniques, and authentication techniques. These three key areas encompass a wide range of design and implementation security requirements, including, but not limited to, those associated with:

Under Physical Security, FIPS 140-2 lists requirements for single-chip modules, multiple-chip embedded modules, and multiple-chip standalone modules. Each requires a different type of physical protection depending on the security level, and the levels are increasing, meaning the higher levels offer a boost in security over the lower levels.

A multiple-chip embedded module conforming to Security Level 4 requires a tamper detection or response envelope with tamper response and zeroization circuitry, which is circuitry that facilitates the automatic erasure of sensitive information, such as plaintext data and cryptographic keys, if the module is tampered with or stolen.

Cryptographic modules conforming to Security Level 4 must also employ both environmental failure protection (EFP) features or undergo environmental failure testing (EFT). These requirements are unique to this level and mainly focus on protecting the modules from extreme fluctuations in voltage and temperature.

What algorithms are compliant with FIPS 140-2?

The following algorithms are compliant with FIPS 140-2:

Review Annex A of FIPS 140-2 for more information about these algorithms.

Graphic: FIPS 140-2 and FIPS 197 go hand in hand. The former specifies a wide range of cryptographic module security requirements, and the latter is the FIPS designation for the Advanced Encryption Standard (AES).

FIPS 140-2 is the overarching NIST security standard for cryptographic modules transmitting sensitive but unclassified information. FIPS 197 is the NIST’s publication name for the Advanced Encryption Standard (AES), which specifies a FIPS-approved cryptographic algorithm that’s used to encrypt and decrypt a module’s sensitive information.

Graphic: The National Security Agency (NSA) has its own designations and approval processes for cryptographic products.

The NSA has its own classifications for cryptographic products. For example, a cryptographic device that can protect sensitive but unclassified information is known as a Type 3 product, which may or may not use the NSA-approved Advanced Encryption Standard (AES).

The NSA also specifies a Type 1 and Type 2 product, which are used to protect classified and unclassified government information, respectively. 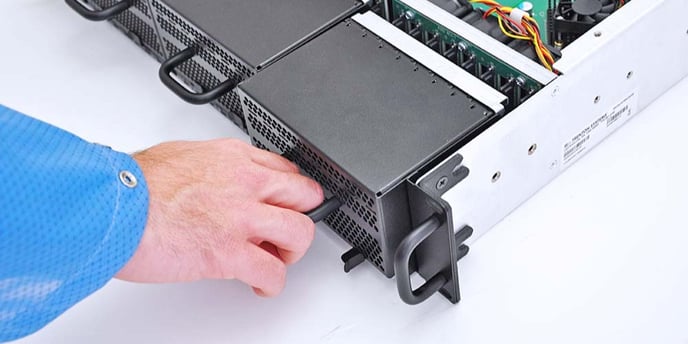 Photo: Defense and aerospace customers frequently ask Trenton Systems to incorporate FIPS drives into their Trenton rugged servers and workstations. We have no problem satisfying this requirement for our customers.

Trenton Systems can incorporate the latest and greatest hard disk drives (HDDs) and solid-state drives (SSDs) into its rugged servers and workstations upon request. We acquire the drives from a network of trusted manufacturers that specialize in FIPS 140-2 compliance and self-encrypting drives (SEDs).

Many of our customers are using FIPS-140-2-compliant storage drives in the field right now, and they can rest easy knowing that their sensitive information is well-protected from those who wish it weren’t. Our latest rugged computing solution, the 3U BAM Server, designed with aerospace and defense customers at top of mind, can also utilize FIPS drives, among other advanced security measures, to protect customers’ sensitive information.

We’d be happy to speak with you about satisfying your FIPS 140-2 requirements and others. In fact, we have an entire compliance team on standby to address your unique needs.

Keep an eye out for our upcoming blog post on FIPS 140-3. We’ll dive into all the differences from its predecessor, its current status, and what it means for vendors looking to achieve validation going forward.